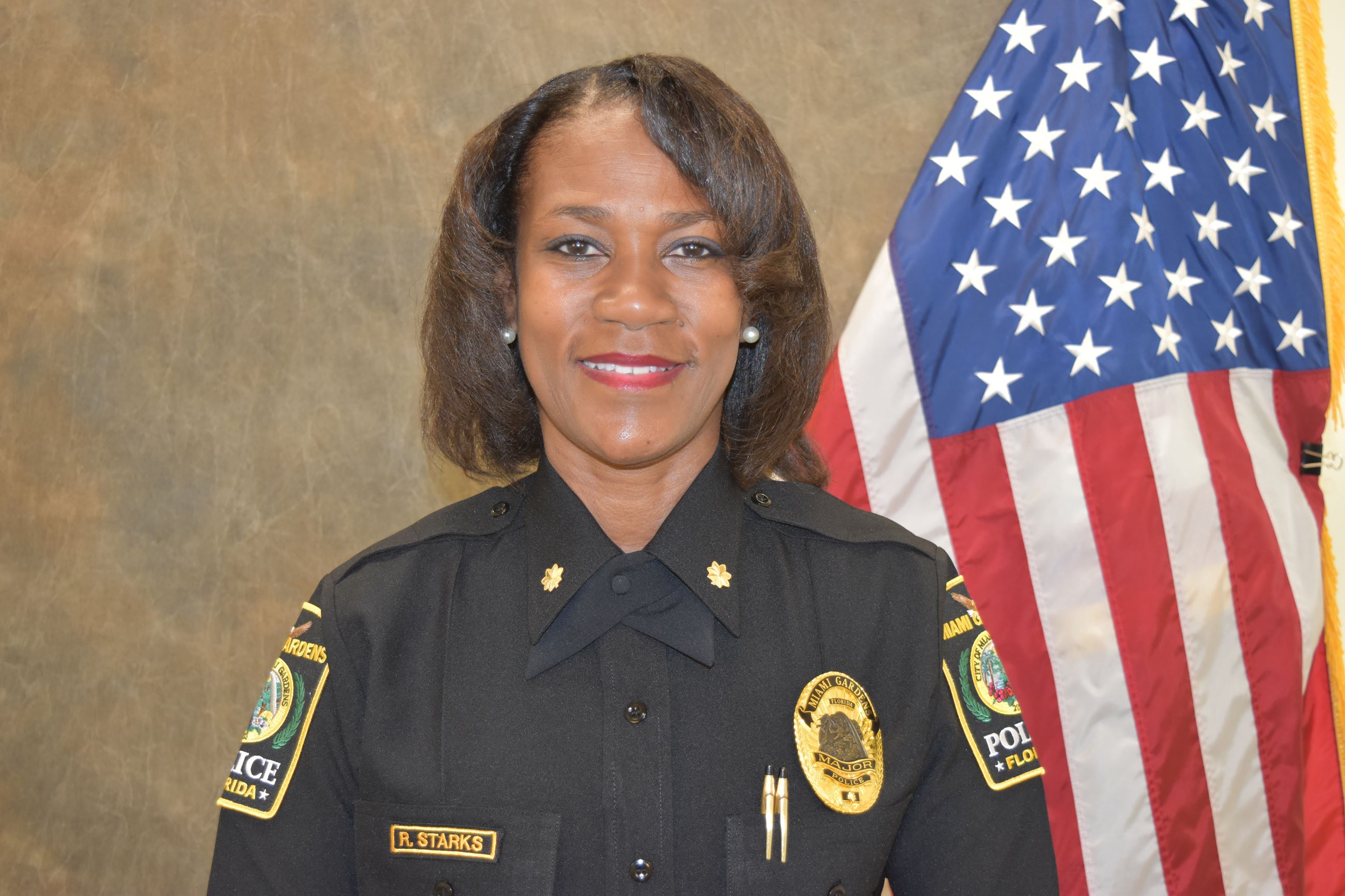 Robin Starks is a Native Floridian born and raised in South Florida. She has been a resident of the Miami Gardens area for over 50 years. Robin Starks joined the City of Miami Gardens Police Department in July 2017, as the Major of Operations, which is staff with approximately 110 sworn and non-sworn personnel. She is responsible for overseeing the largest division of the Police Department, which consist of Uniform Patrol, K-9, Motors, School Crossing Guards and Resource Officers, Traffic Enforcement Unit, Community Enrichment Team, Bike Detail, Police Athletic League, Explorer Post, and the Honor Guard Detail.

Major Robin Starks is a highly experienced law enforcement management professional with over 30 years of experience. She started her career with the City of Miami Police Department as a Public Service Aide and later pursued her career as a police officer. Major Starks worked in a number of units after spending several years working uniform patrol. She has worked in several elite units such as the Special Investigations Section: (Money Laundering, Dignitary Protection, and Vice Detail). Major Starks also worked in Internal Affairs, Community Relations, Street Narcotics, Training Unit, and the Personnel Development Division, ending her career overseeing the Overtown Problem Solving Team and the Little Haiti Net area.

Major Starks has worked with many local municipalities throughout Dade and Broward County in several multi-task force operations while detached with South Florida Impact. On the federal level, she has worked in conjunction with the Drug Enforcement Agency, Federal Bureau of Investigations, and Florida Department of Law Enforcement. After almost 27 years of service with the City of Miami Police Department, she was offered the position of Chief of Public Safety at Miami Dade College Kendall Campus. She was responsible for the operations and management of over 80 employees, that consisted of call takers, dispatchers, public safety officers, and parking lot attendants. Additionally, she was tasked with the overall operational assessment of high-profile presidential events held at Miami Dade College Kendall Campus.

Major Starks obtained her Bachelor of Arts Degree in Organizational Leadership, Master of Arts Degree in Professional Studies, Executive Management, and will be receiving her Doctoral Degree in Education, Leadership, and Innovation from St. Thomas University. She is also a graduate from the Southern Police Institute for Command Officers Courses. She holds multiple certifications as an instructor in both general and high liability topics from the Florida Department of Law Enforcement. Her background includes supervisory experience where her exemplary leadership skills were utilized to direct the activities of police and support staff. Major Starks educational background consists of developing strategic plans for the delivery of law enforcement and public safety services. She is well-versed in modern principles, practices, and methods of police administration, investigations, and special operations.